These gardens were laid out by the British architect Edwin Lutyens and feature a variety of flowers, including roses, dahlias, and marigolds, as well as a number of trees and shrubs. The Rashtrapati Bhavan Mughal Gardens are open to the public for a limited time each year, usually in February.

Amrit Udyan, spanning an enormous 15 acres, has been rightly regarded as the heart of the Presidential Palace. The gardens of Mughal Gardens were influenced by the Mughal Gardens in Jammu and Kashmir, the gardens surrounding the Taj Mahal, and even Indian and Persian miniature art.

Rashtrapati Bhavan’s gardens are adorned with roses, tulips, Asiatic lilies, daffodils, hyacinth, and other seasonal flowers. Over seventy species of annuals, perennials, biennials, and annuals are available, not counting exotic bulbous and winter flowering plants. There are also 60 of the 101 species of bougainvillaeas in the garden. Alyssum, daisies, pansies, and other similar plants are used to decorate flower beds and serve as borders. The doob grass that now covers the area was initially imported from Calcutta (now Kolkata) during the planting of the Mughal Gardens. There are a wide variety of trees, shrubs, and vines in the Gardens, including the Moulsiri tree, Golden Rain tree, flowering Torch Tree, and many others.

Perhaps the most striking manifestation of democracy has been the opening of the grounds and gardens to the general public. The third loop of the journey takes us through the immaculate Mughal Gardens of Rashtrapati Bhavan, which are laid out across three levels. Apparently, the vast geometrical designs of the landscape can only be viewed from the ground floor. In order from shortest to longest to largest, we have the Rectangular Garden, the Long Garden, and the Circular Garden. 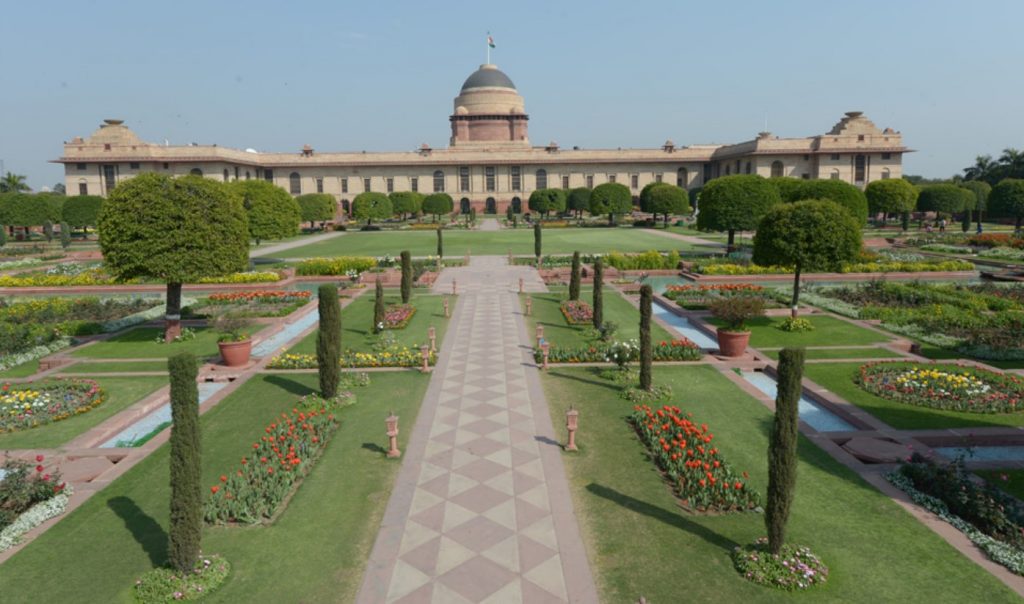 Other than above mentioned period, one can visit Rashtrapati Bhavan main building and Mughal Garden via booking on this Official Government website (link given below).

Note –  Booking for a Visit opens seven days in advance, entry is allowed through Gate No. 35

Here is the map for Rashtrapati Bhavan Mughal Garden which is renamed as Swami Vivekanand Garden.

The Mughal Gardens have a convenient parking structure. Parking spaces are available for those who want to arrive by car. Parking that is permitted can be found close to Mughal Gardens.

Here are the names of Gardens in Rashtrapati Bhavan

Closest to the Rashtrapati Bhavan main building is the Rectangular Garden. There are four channels total, two running east to west and two running north to south. These waterways create a square grid throughout the landscape. Water jets as high as 12 feet shoot out of sandstone fountains at the juncture of these channels; their design was inspired by the Victoria Regia Lily. The garden is surrounded by a carefully planted forest of Moulsiri trees.

At these gatherings, attendees get the opportunity to meet the President and other dignitaries, as well as prominent members of the public and diplomatic communities, members of the media, and many more.

The Central Lawn has previously hosted similar “At Home” ceremonies for visiting Heads of State. That method, however, has been abandoned at this point. As part of President Obama’s state visit to India in 2010, the State Banquet was held on the Central Lawn. India’s fifth president, Fakhruddin Ali Ahmed, had his funeral prayer meet on the Central Lawn in 1977.

The Rectangular garden is flanked on two sides by terrace gardens. Both of these gardens feature a fountain that empties into the middle, creating a well. Two towering gazebos made of sandstone, built by Lutyens, stand at the end of these gardens. The four Putranjiva roxburghii trees planted at the Mughal Gardens’ corners provide natural shelter for the gazebo, a structure commonly designed to provide shelter and shade in broad open areas.

This garden has a series of narrow water chutes that lead to the larger canals; these chutes have a striking resemblance to the water channels in Mughal design. These ingeniously crafted water chutes are reminiscent of swimming fish thanks to their multi-tiered stairwells and fish-shaped carvings.

There are 16 rose beds in Long Garden, its primary focus. This garden is commonly referred to as the Purdha garden since it is 430 feet in length and is encompassed by walls that are roughly 12 feet in height. Beds are framed with dahlia, marigold, salvia, gazania, oxalis, ranunculus, and irises in addition to common and antique rose varieties like Rose Ice Berg, Rose Summer Snow, Rose Okla Homa, Rose Lousiana, and more. A pergola made of red sandstone supports climbing plants like rose bushes, patrea, bougainvillaea, and grape vines over the centre of the patio. 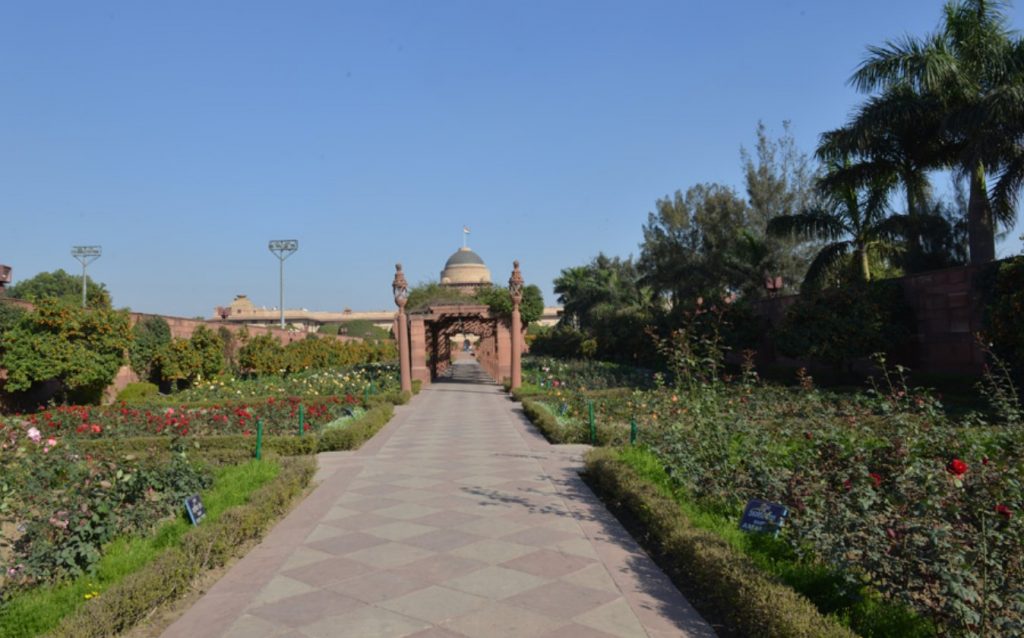 Rows of elephant trunks carved from sandstone flank either side of the pergola. Again, it appears that Lutyens is attempting to include an element of Indian design into his work. Climbing plants like flame vine, trumpet vine, lassan bel, and jasmine perfume the air along the 12-foot-high walls that surround the garden. The China Orange trees and Kumquats that have been planted along the walls look great. The Circular Garden can be reached via the Long Garden.

At the very end, you’ll find the Circular Garden, also called the Sunken Garden or the Pearl Garden because to its unusual design. Lutyens declared, “I am constructing a butterfly garden—of all the plants butterflies enjoy.” This declaration gave rise to the garden’s original name: the Butterfly Garden. A variety of fragrant stock, phlox, pansies, marigolds, violas, alyssum, and many other flowers are planted in the amphitheater-like structure contained by rings of flower beds. 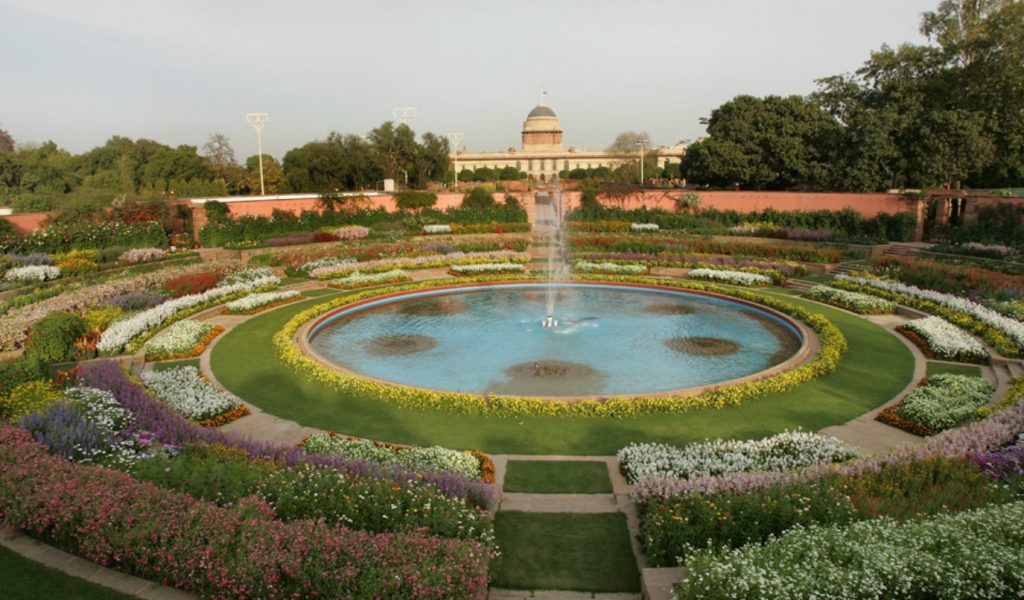 Around the outside of the garden’s circular wall are more than 30 different types of seasonal flowers, including Dahlias that may reach heights of up to 8 feet. The newest addition to this garden is a bed of tulips.

At the heart of this garden lies a secret bubble fountain housed in a spherical pond. Lotus blooms with a border of calendula and marigold can be found in this pond. The essential oils of aromatic and herbal plants grown in the Rashtrapati Bhavan Gardens are distilled in a unit conveniently located next to the Circular garden. During the annual Udyanotsav festival, farmers receive demonstrations as well.

The Herbal Gardens at Rashtrapati Bhavan Estate were first created in 2002 by former Indian President Dr. A.P.J. Abdul Kalam. He said, “Every day I look out my window in Rashtrapati Bhavan, I am greeted by a dazzling array of seasonal flora and fauna.” Between the months of March and May, the estate’s extensive flower and tree collection is at its peak beauty, attracting many visitors. Gardens on the estate, including the Mughal garden, as well as herbal, spiritual, musical, nutritional, tactile, bio-fuel, and bio-diversity parks, fill the air with colour and scent even in the dead of winter.

Herbal Gardens were founded under the guidance of the Central Institute of Medicinal and Aromatic Plants to realise President Kalam’s dream of promoting natural treatments (CIMAP). In these gardens, you may see around 33 different types of aromatic and healing plants.

In the case of Ashwangdha, its oil is used as a dietary supplement, in cosmetics, and in the treatment of atopic eczema in premenstrual women; in the case of Bramhi, its use is limited to mental disorders like epilepsy, insanity, and memory loss; and in the case of Evening Primrose, its use is limited to dietary purposes, cosmetic applications, and the treatment of atopic eczema in premen Medicines such as pain balm, analgesic creams, and cough syrups all make use of menthol.

Plants like Stevia, which can be used as a healthy sugar substitute, Isabgol, Damask Rose, Tulsi, Geranium, Lemongrass, etc., are also very significant. Next to each garden bed, the advantages of the plants grown there are described. Farmers are urged to produce medicinal and herbal plants, as they are becoming increasingly lucrative and useful to society, by inviting them to visit the gardens. Soon after the first phase of the Herbal Gardens was established, the National Botanical Research Institute (NBRI) and the National Medicinal Plants Board collaborated to establish the second phase. All sorts of significant trees, annuals, perennials, and shrubs can be found in this garden. Bel trees, Jamun trees, Harra trees, Baheda trees, Chandan trees, Amla trees, Neem trees, and many others are among them. This garden also features Tejpatta, Kapoor, Hadjod, Datura, Laung, and Dalchini.

Treatment options in Ayurveda, Yoga, Naturopathy, Unani, Siddha, and Homeopathy are available at the AYUSH Wellness Clinic (AWC). Herbs grown in the Rashtrapati Bhavan Herbal Gardens will be made accessible for Ayurvedic and Unani treatments at the AWC as part of the government of India’s effort to promote these alternative medical systems.

The Spiritual Garden of Rashtrapati Bhavan, an initiative of President A.P.J. Abdul Kalam, is widely regarded as his most original design. Here, followers of the many religions prevalent in India can tend to plants and trees sacred to each. This garden was designed to demonstrate tolerance and promote the ideal of peaceful cohabitation among people of different faiths and cultures.

The Rudraksh tree, erected by Dr. Devi Singh Shekhawat on October 25, 2007, stands at the entrance to the Spiritual Garden. Some forty varieties of sacred plants and trees, including khair, bamboo, sandalwood, henna, sita ashoka, butter tree, temple tree, kadamb tree, paras peepal, fig, date palms, krishna burgad, jasmine, reetha, and shami, are housed in the Spiritual Garden. In the Spiritual Garden, a pond was constructed on February 13th, 2015. This artificial body of water is home to several different kinds of lotus and water lily.

This musical garden was the brainchild of former president A.P.J. Abdul Kalam and opened in February 2006. It exemplifies the synergy that may occur when music and science meet. The President’s Estate features a musical garden whereby digital electronics, electromagnetism, hydrodynamics, and hydrostatics are displayed in three massive water fountains in a space that was formerly utilised as a nursery. The audio system is fed digital audio files via a computer-controlled programme controller. 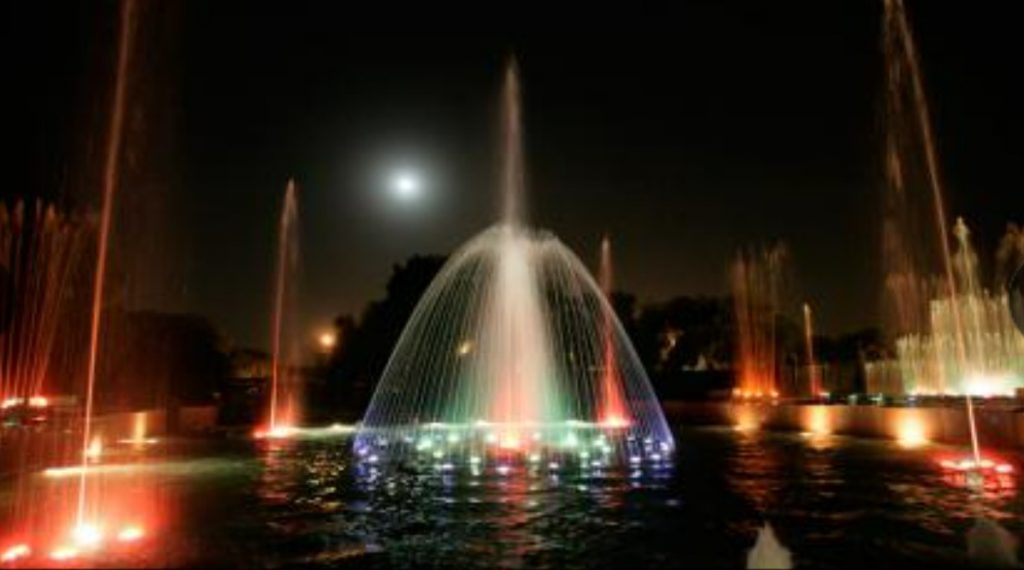 The peacefulness of the neighbourhood is disrupted by this Musical Garden, which is surrounded on all sides by a tennis court, bio-diversity park, the Bonsai Garden, and the Herbal Garden. The national bird like this garden, and it is not uncommon to see one here. The shehnai, veena, and patriotic songs like Vande Mataram provide the perfect accompaniment to the musical fountains. Brilliant lights in a rainbow of colours, from white to red, add a mystical quality to the evening.

Pandit Shiv Kumar Sharma played a santoor recital that was so captivating, the fountains at Rashtrapati Bhavan’s Musical Garden began dancing in time with the music. The garden’s banyan trees act as a natural divider between it and the neighbouring herbal garden.