Delhi is all set to host the Kanwar yatra, a pilgrimage of devotees of Lord Shiva, beginning July 14. Lacs of kanwariyas are expected to take part in the annual event. The kanwariyas, who carry pots of water from the Ganges River to temples dedicated to Lord Shiva, will be accorded a warm welcome by the Delhi government. Special arrangements have been made for their stay and security. A large number of police personnel will be deployed along the route of the yatra to ensure its safe conduct.

The Delhi government has also appealed to people living along the route of the yatra not to obstruct or inconvenience the kanwariyas in any way. After 2 years of Covid epidemic and lockdown, this time Kanwar Yatra is starting. The Delhi Traffic Police has made preparations to deal with the situation of traffic jam on the route of Delhi and has given complete details of the route and the diversionary road.

How many routes and how many camps for Kanwariyas?

This time Kanwar Yatra is starting from 14th July, which will end on 26th July. Police believe that the crowd will increase from July 21. Kanwar Yatra could not take place after 2019 due to Covid. Through Delhi, a large number of Kanwariyas go towards Haryana and Rajasthan. This year the number of Kanwariyas is estimated to be 15-20 lakh. Due to the February 2020 riots in the North-East district and the current environment going on in the country, the atmosphere has changed a bit.

There will be a possibility of Traffic Jam here

Kanwariyas will pass through these Roads

(Note: Apart from these many important roads and intersections, there is movement of Kanwariyas on many other roads in Delhi.)

There will be a Diversion here on a Crowded Day 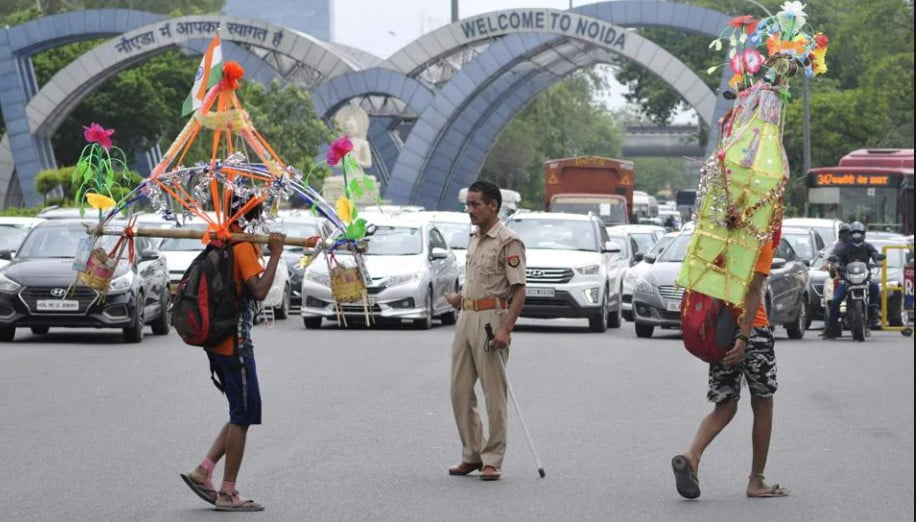 How Traffic will be managed

Kanwariyas are requested to follow their fixed route and path made. Due to this there will be no possibility of any kind of accident. Some new flyovers have been built, due to which the traffic will go up and down to the Kanwariyas and the problem of jam will not remain there.

More than 1925 traffic policemen will be deployed on all the main roads. At the time of the arrival of the Kanwariyas at the intersections, they will make a way for them. 56 cranes will be installed on these routes. Traffic policemen will also make a smooth system by patrolling by bike.

Kanwariyas are requested by Delhi Police to register themselves at https://kavad.delhipolice.gov.in You will also be registered while entering the Delhi border. Therefore it is requested that all Kanwar Yatris should carry their Aadhaar with them.CCTV cameras will be installed in the border areas and in the Kanwar camps. Drone cameras will also be monitored. Commandos will also be present in 9 camps made for security. A control room will be set up at Apsara border.Verification drive is being run in view of the terror attack. Meetings have been held with the peace committees and the people present in the area. There are strong arrangements from the police side regarding security.